Mendocino’s Anderson Valley, once dismissed as too ‘remote’, ‘sparsely populated’ and ‘laid back’ is now arguably the most exciting New World region for Pinot Noir.

Located over 125 miles northwest of San Francisco, it remains remote. But it is a rare transverse valley, running east to west and ending about 10 miles from the Pacific. This allows the coastal fog and breezes to sneak in along the Navarro River which connects to the Pacific. About 18 miles long, the Valley has vineyards located at elevations from 200 feet along creeksides to 2,000 feet on the upper slopes.

As a wine region, Anderson Valley is defined by the interplay of fog and sun creating wide diurnal temperature swings during the growing season. Navarro’s Ted Bennet, a true pioneer, recently noted: ‘2018 was a return to a typical growing season with daily temperatures in the low to mid 20s (˚C) with only an occasional scorcher. Harvest began in our lower elevation vineyards in the final days of September and carried on through the third week of October.’

The Anderson Valley caught the attention of Roederer in the 1980s. After an exhaustive search, it settled in the western end of the Anderson Valley to produce sparkling wine. It eventually developed 400 acres of Pinot Noir in the coolest sector known as the ‘Deep End’.

Wineries and winemakers hell-bent on making great, distinctive, cool-climate Pinot Noir were blown away by Roederer’s commitment to Anderson Valley. One was Napa’s Duckhorn which in the early 1990s acquired an old winery and vineyard in the eastern end and created a Pinot Noir brand, Goldeneye. It debuted in 1996.

Since then, Napa’s Twomey, Long Meadow Ranch, Hess, Cakebread, Castello di Amorosa and J Davies have bought into the Valley. Jackson Family owns Edmeades, the oldest winery in the Valley.

But the pace here remains so non-Napa in all the good ways. Visitors to Toulouse, Lichen, Philips Hill, or Foursight will likely be greeted by one of the owners. And most, like Toulouse, say ‘No appointment necessary’.

Winemakers spend lots of time in the vineyards and like winemaker Joe Webb of Foursight, they handle the lab analysis and punch-downs.

Many winemakers like Webb are owners. Jason Drew is Drew’s winemaker; Phil Baxter is Baxter’s winemaker. Newcomer Brad Jonas is owner/winemaker at Minus Tide. All are multi-talented, as is veteran Van Williamson, now with his own winery, Witching Stick.

At present, there are 32 wineries located within the Valley with close to two dozen outsiders contracting for grapes. Among those coveting Pinot Noir from local growers are such well-known Pinot fanatics as Williams-Selyem, Walt, Kosta-Brown, MacPhail, Fel, Donum, Arista, Withers, and Siduri.

Over 75% of the 2,502 acres planted are Pinot Noir, and almost every new acre established over the last five years is Pinot. Most of the 91 vineyards are small, under 20 acres. But the demand is big.

How big? Located on steep, southwest facing hillsides on the northeast edge of the Valley, Ferrington Vineyard is a good example. Owned by the Schoeneman family, its 20 acres of Pinot are planted to five different clones. At last count, at least eight wineries select a favourite small block and bottle a Ferrington Vineyard Pinot.

Most Pinot Noirs made from other vineyards are small batch wines letting the vineyard character shine through. To make the point, Foursight bottles a ‘Zero New Oak’ Pinot Noir letting the Estate vineyard speak for itself. It comes across with typical bright strawberry, raspberry fruit with a floral, rose petal component, but with good acidity in an elegant, velvety package.

But there are so many ways the Valley’s Pinots can capture subtle differences. Within one small vineyard, Black Kite Cellars has three separate blocks. All three differ only in the row orientation and elevation; yet the wines are not the same.

Navarro and Handley Cellars two pioneers, remain among the top producers. Foursight and Witching Stick are my current favourites. But youthful energy was palpable at a recent Pinot event. Among the newbies, Maggy Hawk, Waits Mast, and MinusTide were big hits.

In many ways, Goldeneye now sets the bar high. Of the four Goldeneye vineyard designates, collectors are torn between ‘The Narrows’ and the high end ‘Ten Degrees’.

But the competition is wide open. In mid-May, Pinot lovers flock to Anderson Valley to rate the latest at the annual Pinot Noir Festival.

Geography: Vineyards located along the Pacific coast, on hillsides and in sunny inland valleys. The Pacific ocean has a major role to play in the coastal regions: cool air rises from the ocean and forms mist and fog over the land in the morning. This helps the grapes to ripen slowly, developing fruit aromas while retaining acidity. 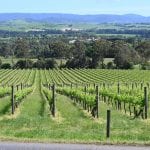 Yarra Valley – Phylloxera Has Given us a Chance
Join our newsletter