It’s been 15 years since my last visit to Madiran. I’d forgotten how pretty it was, with its gently rolling Gascon hills interspersed with woodland and vines. But no one would call the wine pretty. Made principally from Tannat grapes, though often softened with a dose of Bordelais varieties, it can be a bruiser, thanks to its ferocious tannins. Tannat is low-yielding too (which can result in high alcohol) – if overloaded, its grapes can struggle to ripen, giving raw tannins, astringency and a dogged rusticity. Even at its best, Tannat doesn’t ‘sound’ like an appealing wine. But on the plus side, it has high acidity, which tends to cut through the chewiness and force of the grape.

Most producers adopt a two-tier system. Their more basic wines may well contain other varieties (though 50%Tannat is the legal minimum here), while a prestige bottlings tend to be pure Tannat that’s been aged in barriques. As various producers have remarked to me: ‘Oak drinks Tannat.’ In short, a wine with so much weight and extract can cope easily with a high proportion of new oak.

Each style works in its own terms. The gentler basic style can be better at the dinner table than the turbo-charged prestige bottlings, although the latter can work splendidly with game or beef. Top estates also ensure these wines have some bottle age before release, and many current vintages are 2015 or 2016.

Alain Brumont, whose 1985 Montus Prestige was the first pure Tannat of modern times, and a wine that attracted international admiration, is the high priest of Madiran, but many other estates have followed where he led. His neighbour Patrick Ducournau invented micro-oxygenation, a system whereby controlled doses of oxygen are bubbled into the wine so as to soften the tannins. But this technique has fallen out of favour for the most serious wines, which are given suppleness by lengthy ageing.

Madiran remains an extreme wine: opaque in colour, suffused aromatically with black fruits, and dense, even tarry on the palate. It’s not for everyone. But when it’s well made, and recent tastings from most serious producers show an admirable intensity and balance to the wines, it’s deeply impressive.

Brumont remains the driving force here, with great wines from his two domaines of Montus and Bouscassé, but he is far from alone. Château d’Aydie, Château de Viella, domaines Capmartin and Berthoumieu (now owned by Viella) are consistently fine at the top level, and I’ve had excellent bottles from Laffont (‘Hecate’), Laougué (‘Arbison’), Château Peyros (‘Greenwich’), Damiens (‘St Jean’), and Labranche-Laffont (Vieilles Vignes). There’s an impressive range of terroir-based wines from Vignobles Marie-Maria (new to me), but the two cooperatives, Plaimont and the Cave de Crouseilles, still lack excitement at the top level. Nonetheless Madiran remains one of those regions in France where even the seasoned traveller will find much that’s new or unfamiliar to enjoy.

Stephen Brook is a multi award winning author of more than thirty wine books, his works include Complete Bordeaux, The Wines of California, The Finest Wines of California. Brook also fully revised the last two editions of Hugh Johnson’s Wine Companion, and he writes for magazines in many countries, including Decanter.

Geography: wines made around the village of Madiran in the Gascony area of south-west France. Around 100km from the Atlantic Ocean – and 50km’s from the Pyrenees mountain range. Significant rainfall in winter and spring, but long, dry, hot summers are ideal for ripening vines. Madiran AOP wines must be aged for 12 months before being able to be presented for approval 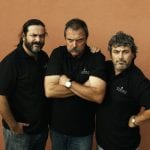