Okanagan On The Up | Académie du Vin Library

On the 49th and 50th Parallels, this is the world’s northernmost world class wine region. The Okanagan Valley lies in a rain shadow between the Coastal (Cascades) and Monashee mountain ranges, about 400 kilometres inland from Vancouver. The landscape of low hills and oblong lakes was formed by the final retreat of the glacial ice between 9,000 and 11,000 years ago – the glaciers leaving large deposits of gravel, silt and sand on the bottom and sides of the valley. The climate is continental with four precise and distinct seasons. Temperatures range from –20˚C in particularly cold winters up to and above 40˚C in summer. Rainfall is low, at between 250mm and 400mm a year, and the grapes benefit from cool nights, allowing them to retain their natural acidity. There is no rain during the autumn, which makes for a long, dry harvest.

My visit in late October was at the invitation of Mrs Lana Popham, Minister of Agriculture for British Columbia, on behalf of the Okanagan Wine Initiative which has been founded to promote the region’s rich and diverse range of wines outside the state. Founding members of the Initiative include the 50th Parallel Winery, Culmina Family Estate, Haywire Winery, Painted Rock Estate Winery, Poplar Grove Winery, Summerhill Pyramid Winery, CheckMate Artisanal Winery and Martin’s Lane Winery. Tastings at all of these venues, courtesy of a helicopter provided by the organization, accompanied by Laura Kittmer of the BC Wine Institute, DJ Kearney the region’s leading wine writer and educator, and Dave McIntyre of the Washington Post, proved without a doubt that the region is now producing world class wines from a wide variety of grapes and styles. If proof were needed, it came in four tastings described as ‘The Judgement of BC’.

The Judgement of BC tastings had been the brainchild of Canada’s top wine critic DJ Kearney, whose husband is one of the partners in Haywire Wines. I presided over the first two events in 2015 and again in the last four on my final day in BC. The earlier tastings featured six BC wines and six from around the world of the same varietal and at the same comparative price. This year’s had flights of 10 wines: six from BC and four from other regions, just as had been the case in the 1976 Judgement of Paris Tasting. The following are the top three wines in each flight since the start: 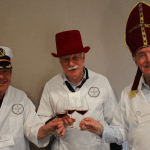