In recent weeks, vineyards across Europe have been battling to protect their burgeoning vines from obliteration. The culprit is not a pest, nor is it a pandemic related threat. It is in fact frost that has caused widespread devastation this year among producers, with France and parts of Italy particularly affected by the cold snap.

For context, vines are pretty hardy plants that are able to endure extremely cold temperatures during dormant winter periods (sometimes lower than –10°C). However, when it comes to springtime, the goal posts shift. As temperatures increase above 10°C, the vines’ sap rises, producing buds that will go on to generate the season’s shoots, leaves, flowers and ultimately grapes. Once the buds have emerged, temperatures need to remain above 0°C to avoid a fatal frosting and therefore a reduced or non-existent yield.

Whilst European producers experienced warm temperatures in March and April, UK vineyards had a very cold start to the season, delaying rather than encouraging bud burst. ‘Temperatures have been very low, with some nights as cold as –9°C,’ says Nick Cran-Crombie, Vineyard Manager at Hambledon Vineyard. ‘We’ll need a hot summer to counteract the late start to the season and achieve required sugar levels for harvest.’

The most common ways of tackling frost in the UK involve using bougies or frost guards. One bougie (candle in French) costs around £7, with 200 required per hectare to make an impact at –2°C. More bougies are required for every drop in degree culminating in 500 bougies per hectare to tackle frosts as low as –7°C. With only an eight-hour shelf life, bougies are a costly investment for vineyards each year.

Raimes Vineyard currently use bougies against frost, but also retains an upright third cane as an additional insurance. Gussie Raimes, estate owner says: ‘we often experience –3.5°C making frostbusters unlikely to be totally effective. Leaving a third cane with additional buds helps us enormously to make up for the frost.’

Black Chalk in the Test Valley opt to use frostguards instead of bougies. These static blowers, powered by propane gas, cover up to one hectare by constantly rotating. ‘We have fired up our frostguards for six nights in total for a maximum of six hours, more commonly a few hours before dawn as this is the coldest part of the night,’ says Jacob Leadley, CEO and head winemaker at Black Chalk. ‘However, temperatures have not been as cold as previous years, and the vines are less developed so need less protection.’

At this stage, as in any vineyard across Europe, it is difficult to judge the extent of the damage that the frost has left behind. ‘We have lost nothing so far, but the risk has not yet passed so it’s too early to say,’ says Emma Rice, head winemaker at Hattingley Vineyard. ‘Some of our clients’ vineyards have reported losses but not on the scale of 2016 or 2017.’

Although the frost damage in 2021 is not as considerable as previous years, there are clearly still concerns regarding a potential reduction in yield. For now, we wish all producers the very best of luck for the coming season and hope that this spring frost will not turn out to be a bad omen for the vintage ahead.

Katrina Smith is an award-winning wine professional with 10 years experience in the industry. She is currently studying towards the revered Master of Wine qualification whilst providing virtual educational wine services via her business Tipple Talk. 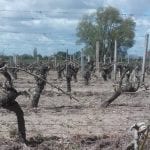