In The Wines of America (1972, revised 1985), wine historian Leon Adams devotes several pages to Mexico. After verifying that Mexican wines began in the 1590s, making them the oldest in America, he adds that Mexico was the likely source of the first vines planted in Chile, Peru, Argentina and California.

Despite the head start, Mexican wine has only been of historical interest until very recently. In 1995, the editors of the Larousse Encyclopedia of Wine politely described it as ‘a real anomaly’. In other wine books, Mexico rarely merited a footnote.

But over the last year or two, a surprising number of articles have appeared describing Mexico’s Baja wine region as ‘the next Napa or Sonoma Valley’. A new ‘ruta del vino’ runs along the 88km Guadalupe Valley, with over 60 wineries ready and eager to host visitors. Several new high-end resorts and well-yelped restaurants are developing a following.

Definitely an emerging tourist destination, Guadalupe is the source of 85–90% of all Mexican wine. It is located about 100km south of the US border, or just over an hour’s drive from San Diego. On an average day, 50,000 cars cross the border. Many non-surfer Southern California types head for the new wine country which begins in Tecate and ends around Ensenada, a major port city. A Wine Museum north of Ensenada opened in 2002.

Baja is a long, thin peninsula defined by the Pacific Ocean on one side and the Sea of Cortez on the other. Its climate is Mediterranean, thanks to cooling breezes, but it is also arid, with only 12–15cm of rain a year. Enjoying sea breeze from both sides, Guadalupe’s vineyard sites overlook the desert and are located at 2,000–2,500m elevation.

Parras Valley, a second and smaller wine region located north of Mexico City, shares one thing in common: elevation. Its vineyards are located from 1,200m up to over 2,100m above sea level. Winemakers in both regions unite behind this mantra: ‘It is all about altitude, not latitude.’

Mexico now has about 100 wineries and over 400,000 hectares of vineyards. However, only about 3,600ha are currently devoted to wine grapes. The rest are for brandy.

The wine re-awakening can be traced to 1972. That year, the Pedro Domecq company, producing brandy in 11 different sites in Mexico, branched out to build a winery in Califia, part of Baja’s Guadalupe Valley. That same year the owners of Casa Maderos, the site of the first winery founded in 1597, shifted its production in the Parras Valley from pot-still brandy to table wine.

Three wineries – LA Cetto, Santo Tomas, and Domecq – dominate current production. But it is the small family owned garagistes which have popped up since 2000 that are creating the buzz by pushing quality and making authentic, distinctive wines.

Of the 100 varieties cultivated, red grapes led by Cabernet Sauvignon and Merlot dominate. There’s a smattering of Spanish and Italian wine varieties with Tempranillo and Nebbiolo playing major roles in blends. Chardonnay, not surprisingly, leads the white varieties.

Working with many old vineyards and new varieties, winemakers are coming up with unusual wines that capture Baja’s unique growing conditions. Nebbiolo on its own makes an unusual full-bodied wine here, as do Tempranillo and Chenin Blanc. But they often end up in intricate, atypical blends. For example, Nimbus, a new family owned boutique is best known for its red blend of Grenache, Carignan and Tempranillo.

Five hundred years after Cortez explored Mexico in search of gold, today’s new crop of winemakers are surprising the world with gold medal winning Mexican wines. I’ll focus on Mexico’s major wineries and winemakers in my next article.

1597: The first winery using the Mission grape, likely sourced in the Canary Islands, was established at what is now Casa Madero.

1706: Vines planted at the first of many mission stations by Dominican and Franciscan monks.

Geography: Located north of the 30th parallel, Baja is Mexico’s major wine region with 4,000 hectares devoted to wine varieties. The climate is Mediterranean, and the dry, arid growing season is tempered by morning fog and cooling breezes from the Pacific Ocean. Most vineyards are located at elevations between 366 and 900 metres and experience wide diurnal temperature swings in the summer months. The Parras Valley is at an altitude of 1,200 metres in an otherwise desert area with annual precipitation between 80 and 100mm.

Viticulture: Soils range from granite-rich alluvial soils in Baja to red clay, sandy loam in Central Mexico. With annual rainfall of 100–150mm, irrigation is common for most vineyards. No known problems with mildew or vine pests. Vine density ranges from 800 to 1,600 per hectare. Yields range from 3.7 to 7.4 tons per hectare. Harvest season begins in late July and stretches into October. Many new vineyards are certified organic. 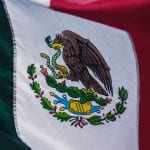