When I received an invitation from Eduardo Chadwick to attend a tasting of vintages from his three flagship wines – Dom Maximiano, Seña and Viñedo Chadwick – to be held in January 2004 at the newly opened Ritz Carlton in Berlin, I accepted with pleasure. Only on arrival the afternoon before did I learn that these wines would be compared blind to similar vintages of first growths from Bordeaux and the top Super Tuscans, the common theme being that all the wines were Bordeaux blends. That evening, Eduardo had given a presentation of his wines to the assorted guests and the following morning the influential Swiss wine writer René Gabriel (aka the ‘wine pope’) and I sat either side of Eduardo at a table in front of 36 of Europe’s most respected palates.

Writing in the splendid book published on the 10th anniversary of this event, under the subtitle ‘Uncorking the potential of Chile’s terroir’ Eduardo begins: ‘Despite having tried all of the traditional – and even some not so traditional – methods for presenting our wines, the critics still seemed to be prejudiced against Chilean labels. The quality was not being fully recognized due to Chile’s relatively short international history and the initial image of primarily being a producer of value wines.’

Reflecting on the day, Eduardo continues: ‘The guests were very attentive, curious, interested and even surprised because very few had ever visited Chile or knew much about our viticulture. This was the first time they had been exposed to such a tasting, yet two hours later the world would begin thinking about Chilean wines in a very different way.

‘I was nervous, of course, and hopeful that our wines would perform nicely and be well-appreciated. I had never done a tasting like this before, so it was really nerve-racking. It would have been a complete failure if our wines had come in last. The auditors collected the score sheets and while we waited for them to tabulate the results, Steven, René and other tasters commented on the wines, which were still covered up. Sometimes they asked the tasters to raise their hands if they thought a wine was Chilean, French or Italian and I could see that the evaluations were quite mixed, and that they were often unable to clearly identify and specific origin. That made me feel more confident about the quality and acceptance of our wines, and I began dreaming that some of our wines might appear among the top five favourites.

‘The results of the 16 wines tasted were handed to Steven and he read the top 10 aloud from the bottom up. I didn’t know the order of the wines and had no idea how they had been ranked. When I heard that Seña 2000 had tied with Margaux 2001 for fourth place, I was very pleased and happy and started to relax as at least one of our wines was in the top five. Then Lafite 2000 was announced in third place. Tension was building and the big surprise came when Steven announced Seña 2001 in second place… followed by Viñedo Chadwick 2000 in first place!

‘At first there was complete silence in the room for no one had expected these results. And then there was murmuring, followed by a long, hard round of applause. I was totally beside myself in disbelief. Someone asked me to say a few words, but all I can remember was thanking everyone over and over again…’

The results of events like the Paris and the Berlin Tastings can be taken as ‘once offs’ and even engender a certain disbelief, so it is important to prove their validity with re-runs.  While the two re-tastings of the red wines from the Paris 1976 tasting that were held in 1986 and 2006 plainly upheld the results of the original, Eduardo Chadwick took his search for consistency to quite another level. Over 10 years he held no fewer than 22 tastings, always placing his Icon wines in blind comparison against the very best from Bordeaux and Tuscany, always judged by the best palates in each country.

Here is the Chadwick odyssey – 2004: Berlin; 2005: San Paulo; 2006: Tokyo and Toronto; 2008: Copenhagan, Seoul, Beijing and Amsterdam; 2009: London and Stockholm; 2010: New York, Chicago, Los Angeles, Hong Kong and Budapest; 2011: Zurich and Helsinki; 2012: Moscow; 2013: Dubai, Seoul, San Paulo and Santago. Across these tastings the Chilean wines took 55% of the top five places and were placed in the top three 90% of the time.  Such consistency was an extraordinarily fine tribute to wines that were considered ‘unknowns’ just over a decade before.

Writing this, I have in front of me the October 2020 edition of Decanter, and which wine occupies the final page under Wine Legends, always put together by Stephen Brook? Seña Aconcagua Valley 1997, the third vintage of Eduardo’s joint venture with Robert Mondavi.  Two decades later Seña became the first 100-point wine Chilean wine. 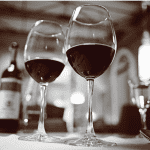 A Wine Cellar in Lockdown, Take Two – Memories are Made of This
Join our newsletter