I attended the press event for the Golden Vines Awards on 7th October 2021, which included the inaugural Diversity Scholarships, supported by the Gerard Basset Foundation. These are awards of £55,000 to two BAME/BIPOC students who are studying for the Master of Wine or Master Sommelier programmes. The Awards are awarded to the world’s best fine wine producers as voted by leading members of the global fine wine industry in The Gerard Basset Global Fine Wine Report.

I talked briefly to several of the worthy winners, including both of the scholarship recipients. Dr Erna Blancquaert is a lecturer and researcher in Viticulture at the Department of Viticulture & Oenology and the South African Grape & Wine Research Institute at Stellenbosch University, and holds three degrees from Stellenbosch, including a PhD in Viticulture. Erna told me how much she is looking forward to studying all aspects of the wine value chain, even though she is more qualified than almost anyone starting an MW course. The support of the scholarship will help overcome some of the practical challenges of studying in South Africa, particularly accessing wines from Europe.

We talked about what she’s currently working on at Stellenbosch which includes looking at vine tolerance, water use, the microbiome and the phenomenon of berry shrivel, and, her particular field of expertise, the genetics of grape vines – learning how certain grape varieties can better overcome environmental challenges and stresses. Erna feels this research is still in its early stages but has great potential. And she loves teaching new winemakers and seeing them go out and make great wines.

Angela Elizabeth Scott gave up a successful career as a human rights lawyer in Washington DC to follow her wine dream, first to California and now to New Zealand’s Hawke’s Bay. She was full of praise for the generosity of people in the wine industry who welcome, support and educate newcomers, mentioning in particular Karen MacNeil, for whom she worked as her tasting coordinator, and the team at Spottswoode Winery. What she loved most about her law background she has also found in wine; the human interaction. She got into wine with an amazing wine group in DC which had the opportunity to taste wines in various embassies, and thinks this chance should be available in more cities (we agree!). She is looking forward to getting into the nerdiness of wine study, and studying the position of privilege that wine, as an industry, inhabits, particularly at the top end. She’s also interested in increasing inclusivity among winemakers, having seen a noticeable lack of it to date.

I was also thrilled to meet two brilliant winemakers, one very experienced and the other someone who has burst onto the scene quite recently. Egon Müller needs little introduction – the maker of some of Germany’s finest Rieslings from the Mosel, and an interviewee of Fiona Morrison MW’s book 10 Great Wine Families. Weingut Egon Müller won the Best Fine Wine Producer in Europe Award. Egon talked about this year’s late harvest, complicating the decision to move the annual auction from September to November but expected it to be a good year despite heavy rainfall, as long as the rain holds off this month. Egon isn’t planning on changing anything in terms of the grapes he grows or his methods, as he is very conscious of his role as a custodian of the wines his estate produces, with the responsibilities incumbent in this. Whilst some around him are now getting good results from planting Pinot Noir, he isn’t rushing to join them.

Charles Lachaux of Domaine Arnoux-Lachaux is the young maverick making significant waves in Burgundy. He was awarded the World’s Best Rising Star and I can only imagine we will be hearing a lot more about him in future. He is passionate about taking Burgundian Pinot Noir closer to the style of wines that were being made in the 1930s, when prices were much more reasonable. He wants to make wines that people drink because they love them, wines that are alive, and will age well and that have been made with minimal correction and management by people who care deeply about what they are doing – he sees no need to fit into a rigid type that has been created by critics. He’s not concerned about making friends while he goes about his revolution either.

David Amadia of Ridge Vineyards, winner of the Best Fine Wine in the Americas Award, spoke of the honour that he feels working with a winemaker of Paul Draper’s calibre. He told me that Ridge hasn’t expanded its vineyards for 25 years and didn’t think it would do so in the future – it has been amazingly consistent for 60 years, under Paul’s helm, producing high quality, single-vineyard wines using traditional techniques that go back to the 1800s, native yeast, and no use of additives, all of which shows in their wines. The team has worked hard to keep its wines at a fair price. He puts some of Ridge’s success down to its global distribution too, which he felt they had done a good job of. It sounds like a great place to work; people stay there for years. Both Ridge Vineyards and Paul himself are featured in our new book On California.

The awards ceremony itself was a glittering affair, and raised £1.5 million for the Gerard Basset Foundation, to be used to fund further diversity and inclusion-related wine education programmes, including future scholarships. Kylie Minogue, who won the Wine Entrepreneur Award for the launch of her rosé wine, performed at the ceremony, as did the Kingdom Choir.

The other awards were as follows: 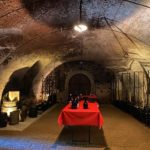 Alice Feiring and the Rise of Natural Wine
Join our newsletter